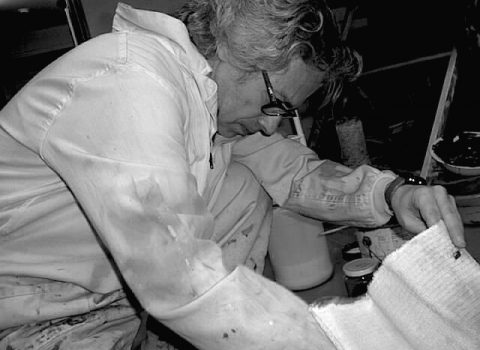 Since 1978 he has developed as a graphic designer and illustrator, he has been working in a wide variety of projects ranging from editorial, design, illustration, creation and cover pages for books, estending to developement of corporation images and advertisement for diversive groups of clients.

During his  3 years residency in Italy where he amplified his studies in design, semiiotics and illustration, also where he colaborated in projects such as scenograhy and graphic design. As an illustrator his work allways fell apon very different themes, executing the majority of subjects in a very realistic manner and the use of classical techniques to using tools of digital technology.

Having a restless spirit has conducted to other elements consisting of music conception, performer and advertising.

Since almost the begining he has together combined his music and art career. During his formation as self-taught painter, in the commencement his approach was more towards a gestual espression of informalism, avently colorful. The transformation of his work posterior was to experiment with raw materials, allowing him to investigate geometric construction of space and where the mixture of these materials, presents a color. The dynamics of this work leads once again in recuperating the gestore and assisting in their cromatic map.

In the exploration of transformative raw materials, constructs a basics of mixed techniques consisting of natural pigments, acrylics, inks, oils resulting in an opulent palette of textures and tones that take on a certain manner to approaching neoinformalism, henceforth producing new dimensions.

He lives and works in Barcelona regulary exhibiting since 1983.